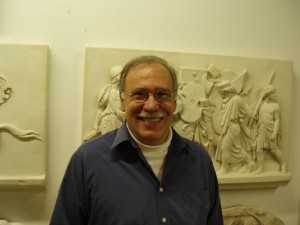 Upon graduating, Shure became an assistant at the traditional sculpture studio of Arcangelo Cascieri and Adio di Biccari. They were both internationally known designers and sculptors who worked out of their historic studio on Tavern Road in Boston. Arcangelo 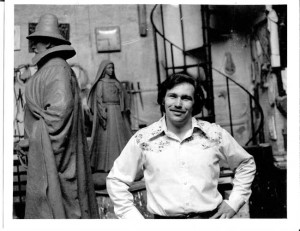 Cascieri was also the Dean of the Boston Architectural Center. From the early 1970’s through the 1980’s, Shure helped to produce many of the public monuments, sculptures, memorials, and restorations completed at the Cascieri-di Biccari studio. A few of the hundreds of projects to which he contributed were sculptures at the National Cathedral, the conservation and restoration of Augustus Saint-Gaudens’s original plaster of Amor Caritas, the restoration and reproduction of Daniel Chester French’s Concord Minute Man, and many models, molds, and reproductions for the Museum of Fine Arts in Boston.

Shure became involved in all the specialties of the sculpture studio including designing sculptures of monuments and portraits, armatures, mold-making, casting in plaster, architectural ornament, and conservation and restoration of plaster, stone, and bronze. As Mr. Cascieri and Mr. di Biccari gradually retired, Shure continued the tradition of the sculpture studio. Also, as a result of working at the Tavern Road Studio, he met Lino Giust, who was a good friend and colleague of Mr. di Biccari. Mr. Giust was another Italian artisan who immigrated to the Boston area and was a master mold-maker, plaster caster, and plaster conservator. Upon his arrival to Boston, he purchased P.P. Caproni and Brother, which was one of the finest studios in the world that produced and restored plaster casts. Shure extended his training by working directly with Mr. Giust. Mr. Giust 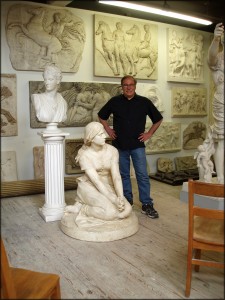 was of the same generation as Mr. di Biccari and Mr. Cascieri and retired at the same time. He passed on the Caproni company to Shure. In 1990, Shure combined both the Cascieri-di Biccari studio and the Caproni company into a new studio at a new location in Woburn, Massachusetts. It is one of the largest and most active studios of its type in the country. He is currently creating many significant public and private monuments and sculptures. He received the Federal Design Achievement Award in 1995 for his heroic-sized sculpture relief of George Washington in the Washington Monument.

Continuing the tradition, his studio, staffed with assistants and artisans, is actively working on many diverse sculpture-related projects. Such work includes the conservation of antique sculpture and monuments and the restoration of sculptural elements on historic buildings including The Old State House in Boston and The Washington Monument. Recent restoration/conservation projects have included work on three Renaissance fountains at “The Elms” for the Preservation Society of Newport County, for which he received the 2005 Laurel Award. 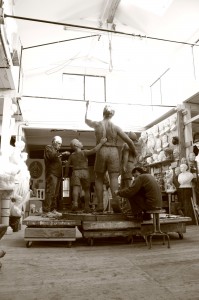 Other conservation projects have been the restoration and replication of the sculpture at Johnson Park at Rutgers University in Camden, New Jersey, and the restoration and replication of two heroic size Rhinoceros sculptures originally created by Katharine Lane Weems for the Bronx Zoo. The studio works with a worldwide clientele of committees, museums, institutions and architects. A few of Robert Shure’s public sculptures and monuments are the Protectors of the American Family in Norwood, MA, the Cy Young Memorial at the site of the first World Series, the Sigmund Freud Statue at Clark University, the John Stark Statue at the Bennington Battle Grounds, VT, the Joe DiMaggio Memorial at Yankee Stadium, the Massachusetts Fallen Firefighters Memorial, the Arnold “Red” Auerbach Bronze Relief at Boston’s North Station near the TD Garden entrance, the Rhode Island Irish Famine Memorial, and the Strand Theatre Fire Memorial in Brockton, MA. He has recently completed a sculpture for the Museum of Science in Boston of the Washburns who were the founders of the Museum, a second sculpture of Worcester Polytechnic Institute’s goat mascot for its campus, and the Puerto Rican Veterans Memorial in Boston. He is currently working on a monument for Worcester, MA depicting the architects and engineers of the Blackstone Canal, constructed in the 1800s, and of late he completed a series of sculptures for the American Village in Montevallo, AL. At this time, Robert has accumulated over 40 years of hands-on experience working in the field of sculpture.